Esperanza Spaulding is a jazz vocalist, bassist, and composer from Portland, Oregon.  She is currently a professor of music at Harvard University.  Spaulding has one four Grammys.  She is the first jazz artist to win in the best new artist category.

Wynton Marsalis is jazz and classical trumpeter and composer from New Orleans, Louisiana.  He has recorded over eighty albums and has nine Grammys.  He is the only musician to receive a Grammy for both his jazz and classical work.  Marsalis was the first jazz musician to win the Pulitzer Prize for Music and he received the National Humanities Medal from President Barak Obama in 2015.  He co-founded the Jazz program at Lincoln Center in 1987.  Marsalis is active in jazz education worldwide and was named an international ambassador of goodwill for the United States by the U.N. in 2001.
His youngest brother, Jason Marsalis will be playing in the Lionel Hampton Big Band during the 2020 Lionel Hampton Jazz Festival in Moscow, Idaho. 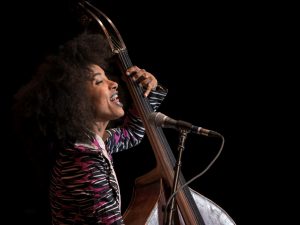